Fighting Fantasy Fest – YOU are the hero!

Jonathan Green has announced that tickets for FIGHTING FANTASY FEST 2014 – the world’s first ever convention dedicated to Fighting Fantasy Gamebooks – are on sale now. Guests of Honour Steve Jackson and Ian Livingstone will be giving a talk about how FF first came to be, artists Chris Achilleos, Russ Nicholson, Malcolm Barter and Tony Hough are guests, and the event will also feature the official book launch of YOU ARE THE HERO – A History of Fighting Fantasy Gamebooks. But that’s not all… 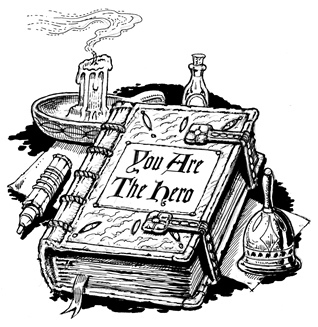 You ARE the hero! Get there!

Every full price paying guest will also receive a complimentary Adventurer’s Backpack. (We want everyone who attends FIGHTING FANTASY FEST 2014 to feel like a VIP.)

So what’s in this Adventurer’s Backpack? What, you mean apart from a collectible convention programme, Tin Man Games app download code, a poster and the bag itself (which is sure to become a collector’s item in its own right)?

How about a limited edition metal miniature of Zagor, the Warlock of Firetop Mountain himself? How about a Pax Britannia novel by Jonathan Green? And how about a Fighting Fantasy gamebook? Not only that, but if you’re one of the first 100 people to buy a ticket for FIGHTING FANTASY FEST 2014 that gamebook will be none other than the much sought after, limited edition hardback of The Warlock of Firetop Mountain, including a solution and map, and a host of other fascinating snippets of information.

And as if that wasn’t enough to tempt you, everyone who buys a ticket for FIGHTING FANTASY FEST 2014 will be entered into a draw to win the chance to have their name appear in a forthcoming Fighting Fantasy app from Tin Man Games.

Aside from the Adventurer’s Backpack, and the money-can’t-buy prize on offer, we also have all of the following planned for Sunday 7 September 2014: 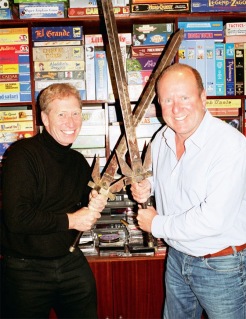 Two gods of gaming in the UK. Seriously, they founded Games Workshop!

Among the items being auctioned at FIGHTING FANTASY FEST will be two swords, currently owned by Ian Livingstone, made to promote the Deathtrap Dungeon video game, and seen here in the hands of the Warlocks of Firetop Mountain.

Father of two beautiful daughters and married to the beautiful Karen, Matthew has been reading and writing fantasy and science fiction since he first read the Hobbit at the age of 7.
View all posts by mattsylvester »
« The secret life of Walter Mitty
To get further in life, surround yourself with people who inspire you »