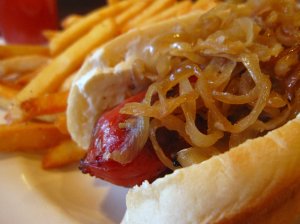 Sometimes, the best family trips can be the ones that are ‘free’. Granted you have food and fuel costs to cover, but that’s a given considering how far people are willing to travel nowadays.

On Sunday my family, accompanied by the Miles family, drove to Charmouth where we spent most of the day walking up and down the beach looking for fossils. We did appallingly badly this time for some reason, but that didn’t matter. We were out in the fresh air, walking along a beautiful beach and spending time with people we love. The hotdogs also helped. It’s amazing how much fun it is to take portable cookers and the like and just cook our food rather than go to the usually over-priced beach shacks. Naturally, we didn’t want to waste any of the food, hence the fact that I had roughly six hotdogs. I say roughly, because it was probably 8 (not 8 separate rolls, I just doubled up the dogs themselves), but that would have ruined the title of this blog 🙂

Father of two beautiful daughters and married to the beautiful Karen, Matthew has been reading and writing fantasy and science fiction since he first read the Hobbit at the age of 7.
View all posts by mattsylvester »
« A short story that goes nowhere
Happiness is moving, and realising that you’ve done completely the right thing »