My life as an author so far.

Buy this and learn to KICK ARSE.

A few years ago, I was a martial arts journalist, acting as features editor and technical consultant for what were the four leading martial arts magazines in the UK at the time. When that kind of fell through due to financial reasons, I then wrote a martial arts book, Practical Taekwondo: Back to the Roots whilst working the doors (yeah, I’m that hard :)).

Despite not having much of an advertising budget, I’ve sold over half the stock, I’ve had reviews on Amazon that haven’t dropped below 4 stars and it is also now available on Kindle.

So popular is this book, that hardcopies are selling for £75 in the UK and nearly $200 in the US. Unsigned I might add! As a result, I’m now selling it myself on Amazon for £23.99 in the UK (signed of course) and $75 in the US (postage is a killer).  Click on the image to the left to buy your copy!

I loved that time of my life and I wish that I hadn’t been forced to return to office life, but money drove me back into the welcoming arms of the NHS. So last Christmas, I decided one thing. I would get my fiction published. I had already written a novel, Shattered Lands: Torquemaster Rising, so I started to submit that to a number of agents after having it edited by John Jarrold.

Whilst doing that, I also decided that I would look at writing short stories in order to improve my writing. The difference between now and then is quite amazing.

Buy this, because it is actually good.

The first short story I wrote with a mind to publication was Death’s Messenger, for the Fringe Works Grimm & Grimmer Anthology. So far there are two reviews on Amazon.co.uk and one on .com, and they all mention my story in particular which I’m very happy about. Click on the image to the right to buy your copy!

So that was one story written, and one story submitted.  Buoyed up by this success, I then went on to write Enlightened Soldier for the Andromeda’s Offspring Anthology, which should be coming out later this year. That too was accepted, which was great as it (somewhat obtusely) followed on from Death’s Messenger and expanded the universe that I had started.

Then came another submission window, and this time the editor wanted submissions that featured potatoes. Yup. Spuds, tatties, pommes de terre, those slightly round and lumpy things you find in the ground (or at the supermarket).

This was most certainly a challenge, how on earth do you write a story that features potatoes (in some format) and make it good? In the end I went with what for me was a truly dark story, about a man who is, quite simply, scum. I even managed to come with a puntastic title, Well and Truly Sporked. I believe that this will be released at the Andromeda One, one-day convention. To which you’re all invited of course!

Aside from that, I started to chat with one of the Fringe Works management. He had requested title ideas for an anthology that was to feature Nazis and Undead. Not just Zombies mind you, this was going to be an original collection and not just the usual “Oh no, here come the Nazi Zombies, how will we get out of this bunker/ship/plane/airship/spaceship?” type book. No, these stories had to be original, had to deal with the idea that although the Nazis were truly a bunch of utterly nasty people, that maybe they didn’t employ the undead, that maybe other people could use the undead against them. And by undead I don’t mean simply Zombies. We have golems, ghosts, and others forms as well as zombies in our stories. 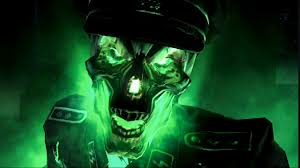 See, not a Zombie. Not my picture either, taken from Wolfenstein.

The anthology will be entitled Raus! Untoten!, and features not only big name authors such as Graham McNeill, Gav Thorpe, Scott M Baker, Josh Reynolds and Steve Lockley, but also a number of first-time authors such as John Hobkinson and Neil M. Roberts, and that’s what makes this project so exciting! No cover yet, so let’s use a Nazi Skeleton!

As a result of this success, I started to get invited to submit and partake in projects that look to be incredibly exciting and in which authors such as Jonathan Green are also participating.

Two of the invitations revolved around the most famous consulting detective in the world, Sherlock Holmes. One is Holmes vs Zombies, a one-off anthology of stories featuring Holmes and, obviously, Zombies.

The other project is one that is not only going to be a series of anthologies, but which will also have stand-alone books such as The Curse of the Baskervilles by Jonathan Green, and has the catchy title of ‘The Moriarty Paradigm’.  If you want to learn more about this, there is already a book, number ‘0’ out already.  Click on the image to the left to buy your copy!

Whilst writing this post I have also started to write for Fringe Work’s Jack the Ripper anthology, naturally I’ve deviated from a story that was merely ‘historical’ in nature, into one that is slightly more ‘fictional’ but I thought that the addition of James Enfield of the Spirituali and Lord Challenger Swift of the Royal Order of Metaphsyical Science made for a far more interesting story.

And finally (at last you sigh), I’m actually going to attend some ‘cons’. My first con was actually SciFi Weekender 2013, which I attended as part of Fringe Work’s posse and which is where I managed to recruit a couple of the authors for Raus! Untoten! The whole thing was a blast and the Saturday night disco was absolutely amazing. Myself and Jonathan Green cut the rug like it was 20 years ago and hard cored it well up. I think that despite our best efforts we didn’t really get down with the kids.

Following on from that, I shall be at Scardiff for the pre-launch signing of volume one of Raus! Untoten! my first signing session. I’ve signed a number of copies of Practical Taekwondo, but I’ve never actually done a signing. As you can imagine, I’m a tad excited about that.

My final con will be the Black Library Weekender, at the Nottingham Belfry. This is of particular interest to me as I paid for what is known as the ‘Golden Ticket’. What this means is that on the Friday, I get to sit with Black Library legends such as Dan Abnett, Graham McNeill, Gav Thorpe, and Aaron Dembski-Bowden, and work on writing a 1000 word short story that will be publication-ready. This doesn’t mean that it will be published, but it does mean that I will get first-hand experience on how to craft a story that is more likely to be accepted by them.

After that, I just need to work out how to get 10 or so New York Times Bestsellers under my belt.

So, as you can see, unlike my ‘I will get fit’ New Year’s resolutions, I’m actually making a damned good attempt at fulfilling this resolution. Where this will go I don’t know, but I would love to be a SUCCESSFUL author and spend the rest of my years creating worlds and taking my readers on fantastic holidays that Thompson will never, ever be able to match.

Father of two beautiful daughters and married to the beautiful Karen, Matthew has been reading and writing fantasy and science fiction since he first read the Hobbit at the age of 7.
View all posts by mattsylvester »
« Graham McNeill – Raus! Untoten! Author Interview
Editing – It’s nerve wracking! »

2 thoughts on “My life as an author so far.”