Sandbagging – In a good way

I thought I would get my hands dirty today. Literally and figuratively. I’m not the best modeller in the world, but I sometimes like to have a go at projects I wouldn’t normally. After a bit of googling, I found a good way of making sandbags and sandbag emplacements for my models.

I’ve just started playing Bolt Action by Warlord Games, which is a 28mm second world war game. I also play Warhammer 40,000, which is a ‘heroically scaled’ 28mm game. The two aren’t anywhere near compatible unfortunately, so I’ve had a bit of a challenge to make scenery that I can swap between the two. Yes, I’m tight. I used Das air drying modelling clay, so won’t be painting these up for at least a few days.

My first attempt was a concave emplacement on a roughly 60mm base cut from card. As you can see, it’s just big enough to fit one soldier in, so is more of a sentry post than a proper emplacement. Start small and work up I say. The scale was hard to do as well, due to the different sizes, so in my compromise, I made it a little low for the Games Workshop Imperial Guardsman (aka Astra Militarum). I think that it works well for both however.

My second attempt was on very thin MDF and built to allow a larger number of models behind it. I estimate that five or so models should fit in behind them. Again, the height is a compromise, and I’ll be able to fit in more Bolt Action figures than I will Games Workshop figures.

The third attempt was – in hindsight – a bit too ambitious and I’m not sure how well it’s all going to hold together when it’s dry. The poles are to support a camouflage net that I’ve yet to make, and were an absolute pig to keep standing. Because I have to make the sandbags individually and pile them on top of each other, every time I add one, I find the others slipping. Very frustrating indeed! Again, this is a sole sentry post, rather than a squad emplacement, but I will be stretching my skills further when I do my next circular emplacement. 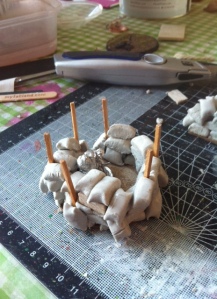 The third and final attempt for today. Bloody hard and lots more to do.

Father of two beautiful daughters and married to the beautiful Karen, Matthew has been reading and writing fantasy and science fiction since he first read the Hobbit at the age of 7.
View all posts by mattsylvester »
« Writing Challenge – What if humans were more diverse?
Strange search terms – Part Two »