Writing for the Black Library – Think you’ve got what it takes? 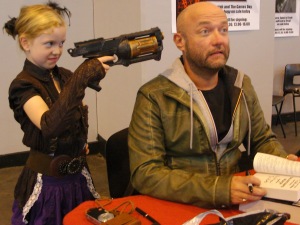 Many fans wish they could hold Dan Abnett hostage and force him to write.

Writing for the Black Library is a dream for many fans of the Games Workshop universes set in Warhammer Fantasy and Warhammer 40k. Its fans are legion and dedicated, and the universes are packed with ideas that have people salivating as they line up to buy the next Sarah Cawkwell, David Guymer or Dan Abnett book.

Some of their authors, such as Dan Abnett, Graham McNeill and Aaron Dembski-Bowden, literally have fans queuing out of the door to get their books signed. This celebrity status is very appealing indeed to any aspiring author. To any author if I’m completely honest. As such, it’s rightfully incredibly hard to be published by Black Library. They are the literary guardians of the Games Workshop universes and they can’t afford to have them diminished by poor or inaccurate writing.

Because there are so many fans, there are also a very large number of people that want to write for them. They’ve seen the success of the big guns, and they love the universe. This means that the Black Library has very few submissions windows and, when they do have a window, there are so many submissions that it takes a very long time for the overloaded editors to get through them all.

Naturally there are a number of things that they do that make this task easier for them. The first is to issue clear guidelines. And they really are clear. However, with the new Deathwatch submissions window, people are already asking the sort of question that they really shouldn’t, as the guidelines really couldn’t be clearer; I’ve set them out for you below.

First of all, we are only looking for short stories featuring the Deathwatch, set in the current Warhammer 40,000 era. You can interpret that in any way you like, as long as the Imperium’s finest xenos hunters are showcased in a manner that fits with the existing background published by Games Workshop.

If your proposal doesn’t clearly feature the Deathwatch and showcase them as asked for above, your story won’t make the cut. It will also annoy the editors (I’m writing from the viewpoint of being an editor for other books) as you’re quite simply wasting their reading time. They’re clear as to what they want, why would you go and ignore that?

They’re looking for a short story, so don’t try to be clever with character development. Get a Space Marine out of a well-known and Codexed chapter, armour him up, give him a load of weapons and ammo, and point him at the enemy. Space Marines kill people and aliens. They don’t, on the whole, wax lyrical about the ethics and morals involved in nuking an entire planet out of existence. Stick to out-of-the-box characters and save your creative writing for when the Black Library asks you to write a book proper. Maybe even – gasp! – a Horus Heresy book!

This is all about showing you understand the universe and can get the basic dakka, raaaarrrrrgh and For the Emperor! right. This is a toe-in-the-door opportunity. Work with what they want and know and if you’re successful, you might find yourself ascending the Golden Throne.

Secondly, we only need a single paragraph which summarises your idea for a full short story, followed by a sample of your best writing from that story. The sample should be no more than 500 words (and we will be checking!) but should be of sufficiently high quality to engage/excite our editors who will be reading each and every submission.

By paragraph, they don’t mean a rambling page-long paragraph. They mean a paragraph. This can be as short as you like, but shouldn’t be overly long. It needs to be straight-to-the-point (like a Space Marine), punchy (like a Space Marine) and have the editors actually excited by your idea. If it doesn’t do that, they’ll read it once and then bin you. They might not even get to the end of the paragraph. Just think that your proposal is going to be read at the end of a Friday, just before they shoot off to meet the hottest date they could ever have dreamt of. You need to hold their attention, not give them an excuse to run.

When they say they want a sample of no more than 500 words. They bloody mean it. 501 words shows that you can’t read the guidelines, or means that you don’t care about the guidelines, or that you can’t write to a specific word limit (which is very important indeed). Whichever of these it is (even all three), this will mark you out as a keen amateur. They don’t want amateurs, they want authors they can work with and who can follow briefs to the letter.

Finally, you should make your submission by email only, to blacklibrarysubmissions@gwplc.com – please attach your submission as a Microsoft Word document (not Works, not OpenOffice, not RTF or any other weird and wacky file formats) and also copy your single paragraph summary into the covering email. Failure to follow those basic requests will result in your submission being rejected. We cannot confirm receipt of any submission, and we cannot respond to requests for additional information or updates on the process.

Here they’re very clear. If you don’t do what they want,  how they want it and when they want it, you’ll be rejected. Everyone knows about how Aaron jokes about never being able to make deadline. But he’s an established super-star author that has made them a lot of money. They know that when he does deliver a book it’s good, it’s going to be popular and therefore it’s going to make them even more money. This in no way applies to you. So don’t even think it does.

Spelling, grammar, incomplete sentence. All will get get you rejected (see what I did there by the way, it was deliberate). Using comic-sans or indeed any font that deviates from the norm might also count against you. If you’re worried about how to lay out the proposal, use the William Shunn format. This makes you look professional, and shows that you have done some investigation as to how professionals submit stories (yes, I know that this is a sample, but it gets you into the mindset).

Don’t be late. Don’t work to deadline. If you work to deadline you will most likely end up with a bag of shite that people will rightfully reject and hold against you next time you submit. Finish at least two days before the deadline. Print it off. Read it out loud and make changes. Read those out loud and repeat until you have a piece of writing so good that they can’t fail to ask for more.

If you really want to write for the Black Library (or anyone for that matter), you’ll work your arse off. If you just like the romantic idea of writing for them and becoming famous, then just dash off a few words and submit, it’ll make the odds better for those that are serious about this.

How do I know all of this? Firstly, I’ve actually edited anthologies, so I know what editors are looking for. Secondly, I’m a published author who has been on the end of rejections, acceptances and edits. Thirdly, I’ve attended a number of ‘writing for the Black Library’ seminars, and they’ve always said the same thing. Don’t believe me? Please feel free to write a story that doesn’t follow the guidelines, make up your own chapters, go into deep character generation and write to deadline. If you do all of this and are accepted, drop me a line and I’ll buy your story when it’s printed.

Father of two beautiful daughters and married to the beautiful Karen, Matthew has been reading and writing fantasy and science fiction since he first read the Hobbit at the age of 7.
View all posts by mattsylvester »
« My 2014 blogging in review, aka why you should use wordpress
Happy 2015 – Let’s hope it’s productive »

2 thoughts on “Writing for the Black Library – Think you’ve got what it takes?”