A not entirely full list of authors for Dr. Who War Doctor anthology – Seasons of War.

Last year I was invited to submit a story to what will most likely become one of the most well-known Doctor Who books there ever was;, the War Doctor charity anthology, Seasons of War. Now, you might think I’m joking, or wondering ‘eh? Who the hell are you, just some fan boy?’, but I’m not. Well, I’m a fan, but not a FAN, if you get my meaning.

The response for this has been overwhelming, with over 350 people submitting to the window. The buildup has also been – at times – overwhelming with people either thinking that it’s a brilliant idea, or that it’s a terrible idea and that there’s no way that it would or should ever  be allowed. Some people even went so far as to actually complain about this. Yeah, they complained about a charity anthology. Amazing isn’t it. Talk about fan entitlement and vanity authors!

Seasons of War is an anthology that features not only people such as myself, but also some very well-known authors and script writers who are well established in the Whovian world. Some (not all of them have been announced as far as I’m aware) are listed below. 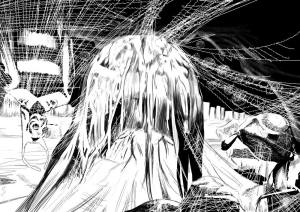 Artwork from the Dr Who Seasons of War, War Doctor charity anthology, by Simon Brett.

As you can see, there are some real hard-hitters in this line up. The book itself currently runs at over 400 pages. Over four hundred. As each author has written at least one story for Seasons of War, including a comic, you can expect to get nearly 40, yes forty stories.

Not only have authors submitted work, there are also some very talented artists contributing work to it. Simon Brett, an artist local to Exeter (which is where I am currently based) has done some amazing work on the comic (yes, there’s a War Doctor comic in this anthology), as you can see from the exclusive panel on the right.

However, it’s not just authors and artists that have come together. Editors such as Declan May have stepped up and ensured that the stories are top-notch, the best they can be, all whilst doing their own full-time paid jobs.

Then, and this is rare, the Director Andy Robinson stepped up and offered to make a short film for the Seasons of War anthology. Yes, you read that correctly, a short film. Using local volunteers, and giving up his own free time, Andy has produced one of the best amateur films I’ve seen for a long time. Even better? You can see it in it’s glory below. And not only did a director step up and make a film, musician and composer Timo Peach stepped up to do the soundtrack. Again, all in his spare time and all for charity.

But what do I have to do to get my hands on this amazing book, I hear you ask? Simple, you have to make a donation. How much? Any amount that you want to. I’m serious. However, don’t be a dick, you’re getting over 400 pages of stories, by some of the most talented writers (and me) in the Whovian world there are. And you’ll be helping Caudwell Kids. So, pop along to make your donation here. If you donate, providing your email address, you’ll receive a download link for ‘Seasons Of War’ on it’s release. Just make sure that you check your Trash/Junk folder in case it gets blocked!

Father of two beautiful daughters and married to the beautiful Karen, Matthew has been reading and writing fantasy and science fiction since he first read the Hobbit at the age of 7.
View all posts by mattsylvester »
« Wanted: Volunteers to colonise Mars
Kidney gate – today’s the day »