Mountaindale Press signs me for a new GameLit/LitRPG trilogy 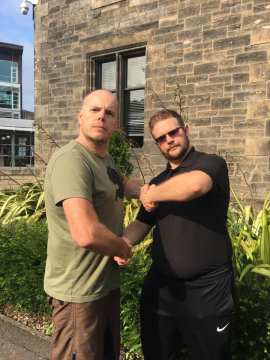 I wrote my first LitRPG back in 2016. Not wanting to use stats too much, I kept them light and the action and character interaction. I went on to rapid release two other books i the series which became known as the Permadeath Series.

Since then, I’ve been working on other projects such as my upcoming urban fantasy Hell Hound, first book in the Jane Doe Chronicles. This too will be a three-book arc.

However, I wanted to get back into GameLit. Penning a quick chapter I showed it to my wife. She’s not a reader, she prefers to be making jewellery for her incrediby successful business – One Dotty Duck – but she immediately said that this was a story she would read.

I put it on the back burner, waiting until I had a chance or reason to develop it further, whilst working on other books.

And then I went to 20BooksEdinburgh where I had the chance to work in the same room as other LitRPG authors. It was the perfect excuse to develop Lone Wolf (working title), especially as the fabulous Dakota Krout was the ‘room leader’.

We worked in sprints. We partied in sprints. We had a great time. And during a coffee break I spoke to Dakota about what I was writing and asked if he’d be interested in a pitch. He said yes.

So I did. I sent him a writing sample, a draft chapter outline and sat sweating. That day he called me aside and said that Mountaindale Press would be interested in having me not only write one book, but actually write a trilogy!

Naturally I said ‘yes’. And so I’m exceedingly happy to announce that yesterday I signed a contract for a trilogy with Mountaindale Press and Dakota Krout. My mountain of being able to write full-time is much closer than it was before.

Father of two beautiful daughters and married to the beautiful Karen, Matthew has been reading and writing fantasy and science fiction since he first read the Hobbit at the age of 7.
View all posts by mattsylvester »
« Burn Notice – Chapter 5 – Execution – A Tom Clancy’s The Division 2 Short Story
Hunter; Hunted – A Ghost Recon Breakpoint Comic »