Samuel Jones lives up to the hype. 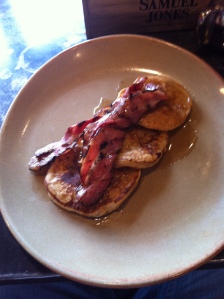 They were lucky, it tasted great and was the perfect portion size.

My friends and family all understand one very important thing about me when it comes to food. It’s very simple and can be expressed as “Woe betide any restaurant that fails in the ‘feed me, satisfy me’ area, because I must admit that I get quite pissy.” One such restaurant that suffered my ire, and which has had me forever after telling people not to go to it, was the Cosy Club.

Whilst taking a perambulation on the Quay with my wife – the youngest was having a go in a dragon boat with school – I realised that we were going past Samuel Jones Smokehouse, somewhere which (if you follow the link) has a very chintzy website indeed. It’s also owned by St. Austell Brewery, and I bloody love their ales. Since it was a tad too early to actually partake of their ales, I suggested that we go in and sample their coffee and tea instead.

You can tell a lot about a restaurant by their coffee. Coffee is something that can be either utterly hellish, or a God-given gift delivered by Angels. There is no ‘it was okay’ with me. Either you love your coffee and take care in selecting the brand, the bean and the way you make it; or you serve the devil’s piss and I will never grace your establishment again. Harsh? Possibly, but coffee is not difficult to get right. Fortunately, the coffee was bang on.

We were served by a lovely chap called ‘Matt’, lovely name too. All of the staff were friendly, smiled in a way that was welcoming and not in the slightest insincere or – even worse – psychotic and were quick to get us seated. Matt managed to avoid making the classic mistake of confusing service with servitude, and couldn’t have been more helpful. He was quick, polite, cheerful, and happy to engage in conversation as we reminisced about the night clubs that used to be on the premises.

I decided that the meal I would try was the American Pancakes and Bacon. A couple of years ago I would have thought that such a mixture (including Maple syrup) was utterly horrendous. Fortunately, I had breakfast with an American chappy who convinced me to try it, and I’ve been a convert ever since. Pancakes are also something that can make or break a restaurant in my opinion, especially American ones.

However, I’m both pleased – and relieved – to announce that the pancakes were cooked to perfection and the smokiness of the chargrilled bacon went so well with the sweetness of the maple syrup that I truly paused in my munchings to think ‘yum, this is good.’ I like to read things. Usually this is menus, cornflake packets etc, but I was happily surprised to find that they had a bit of information about the origin of the name Samuel Jones. It turns out that he was a truly generous Mayor of Exeter back in the 19th century, that did many things to improve the lot of the lives of the people in Exeter, and that he gifted the warehouse in which the restaurant is situated, to the city. If you want to know more, you’ll have to go and have a meal.

So, if you’re looking to have a bit of a bite to eat, I can heartily recommend the brunch menu. The wife had fried egg and bacon in brioche and she too was more than happy with the portion she got. Warning, the egg yolk does tend to run. Despite the golden lava streaming down her sleeve, she managed to put it away quite happily and we were both full enough that we didn’t need to eat lunch, or follow up with anything else until tea, which for me is a rarity!

I should also mention that they have their own brand of tomato sauce. I didn’t add it to the pancakes as that would have been a step too far, but I did sample some from my knife and OH MY GOD it was good. This is the sort of sauce that more certainly needs to grace a hamburger. Luckily they do hamburgers so, when my friends and I do a ‘Man Friday’ trip, I shall be pulling them down to the quay to sample this sauce. I shall also review a couple of the ales and beers that they have on tap at the same time, so watch this space.

The whole meal, including a pot of tea, came to around £15 which isn’t too bad considering the service, the taste, the portion size and the enjoyment we had from it. I can heartily recommend that if you’re on the quay, that you go in and enjoy yourselves.  Be warned however, if you’re with Vodafone, you’ll get sod all signal. As per bloody usual.

Father of two beautiful daughters and married to the beautiful Karen, Matthew has been reading and writing fantasy and science fiction since he first read the Hobbit at the age of 7.
View all posts by mattsylvester »
« I’m so clumsy, I once tripped over a tree
Don’t be afraid to complain in a restaurant. »